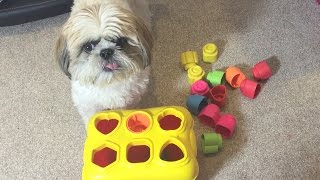 Cooper is a shih tzu. He's 3 years old (born July 1st, 2013) and lives with his owner, Kirsty, in the north west of England. Kirsty got him because she wanted a therapy/lap dog, and wasn't planning to do much training beyond the basics. When he came home with her at ~8 weeks old, she soon began training him to be obedient ("wait" etc) plus some other basic commands. Cooper was quick to learn new commands, and by the time he started his first puppy class, he was far ahead of the rest of the class. At one point, the class trainers had to give him more challenging homework!

A turning point came when the trainers asked the dog owners to teach their dogs a trick - any trick they wanted, with a couple of simple ones banned. Kirsty had noticed that Cooper frequently poked his tongue out a small amount, and she wondered if he could be trained to stick it out on command. She decided to attempt to teach him, but also taught him a safer back-up trick of "crawl," just in case it wasn't possible.

But after just a few days of training using a clicker, Cooper managed to master the tongue trick! AND the crawl trick as well. When the time came to perform the tricks, everyone in the class was very impressed, including the trainers, who said they had never seen such a young dog perform a trick like that (Cooper was less than 4 months old at the time). Kirsty uploaded a video of Cooper doing the trick, and it soon began to be circulated by a number of websites and publications, even being featured on TV shows.

The trainers encouraged the dog owners to keep finding ways to challenge their dogs, even after classes had ended. That's exactly what Kirsty did, starting with purchasing some dog puzzle games for Cooper. After he mastered those, she looked for new ways to challenge Cooper, and ended up discovering that Cooper was able to learn to play with a number of different toddler toys, including a basketball hoop and a shape sorter. And more importantly, he LOVED the challenge of mastering new toys, tricks, and puzzles!

Cooper's unusual tricks have resulted in some media/press attention, including an interview with the Daily Mail, an interview published in The Sun, Mirror, and other publications, and videos shared by a large number of media outlets including the NY Post and Huffington Post. In 2015 Cooper's puppy tongue trick video was even featured on the home page of Yahoo! In 2016 Kirsty and Cooper were filmed as part of a TV documentary (more detail to follow). From 2015-2022 Cooper also had a talent agent - the lovely Layla at Urban Paws UK.

Although some have claimed that Cooper is on the path to doggy stardom, Kirsty isn't sure of where things will go, or where she wants them to go - apart from she wants to make sure that Cooper is happy and content! Currently (December 2016), Cooper spends most of his time snuggling at home, mixed in with some runs on the beach and occasional training sessions. 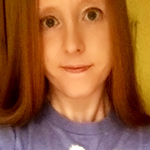 I’m Cooper’s human. Do you really want to know about me? Well, I’m 29 years old and work as a web app/API developer (you probably wouldn’t be able to tell by looking at this site though; it’s not my best work!). I’m a citizen of both the UK and US; I was born in Northampton, England but moved to San Diego, California when I was 9. When I was a kid I was terrified of dogs! I only got over my fear of them after I met a nice, chilled out cocker spaniel as a young teenager. I graduated from UC San Diego in 2009. In 2012 I moved back to England and am now living in Lytham, Lancashire. I sound English when I talk, with maybe a tiny hint of American on certain words.

I'm not a dog trainer and I do not have a degree in animal behaviour. However, I do enjoy reading books and scientific journal articles about dog and animal behaviour. In the beginning, Cooper's tricks were purely for entertainment, but as time has gone by I've realised that I don't care too much for the showbiz world. I don't want to lie about what Cooper can do, or fake his performances so that people are entertained. I'm interested in finding out what Cooper is capable of doing - for real. I also hope to share the importance of mental stimulation for dogs, and to inspire other dog owners to challenge their dogs beyond what they might have thought was possible.

I don't think Cooper is a genius - far from it! Although he has been portrayed this way in the media, I have seen enough super intelligent border collies to know that Cooper's intelligence would not match up. With Cooper, it's his motivation for food and his long attention span which have helped him learn. Keep in mind, also, that I have spent a lot of time training him, and his more advanced tricks were taught over a period of months!

Click to read the article I wrote about Cooper, our relationship, & training!

An example of a trick that requires no cue is the shape sorter – just seeing the toy he knows what to do, and me pointing at the correct hole does not help him. The same is true for all tricks involving complex interactions; he sees the object and knows what to do. Begging – both the pose and action – have a cue which is me putting my hands to my chest like I’m begging; if I move my hands, Cooper moves his paws. He will also do the pose if I say “beg.” Sitting and lying down have oral cues as well as basic hand signals with my hand going up or down. Some of the tricks which involve my body only require body movement and for him to be in a certain position in relation to me. If he is sitting on my left side and I open my legs wide enough, he will weave through them. For “yawn” I either say “yawn” or open my mouth really wide. For “talk” I either say “talk” or silently open and close my mouth, lips pursed a bit (hard to describe but it’s unique enough that I never accidentally give this command). For his tongue trick, he will copy me if I stick my tongue out, and he also responds to “where’s your tongue,” or “farther” if his tongue isn’t out far enough.


Note: Due to the quantity of tricks, I am not able to practice every trick regularly. At any given time there are normally about 5 tricks which he is “rusty” with and needs a bit of practice before he would be able to perform again. There are a few which I intentionally do not like to practice often, like the yes/no one, because I don’t want him to think he can say “no” to getting his ears cleaned or teeth brushed! And although “roll over” is a very basic one, Cooper does not like performing it, so I don’t ask him to do it very often!
Share