This tutorial will explain how I taught Cooper to “count” pieces of kibble. You must follow the “Communicating using buttons” tutorial before you follow this one.

You’ve probably seen videos of dogs counting and doing math before. Most of these dogs, even the famous ones, are receiving extremely subtle signals from their trainers telling them when to stop. These trainers use the Clever Hans effect to give the illusion that the dog is coming up with the answer. There are a few dogs who don’t look at their trainers when they’re answering, but these dogs are rare.

Although it’s a fun trick, I’m tired of seeing all these Clever Hans dogs. I think we should be training our dogs to try to answer by themselves, even if they’re just memorizing the answers. There’s nothing wrong with memorizing answers to simple math problems. We humans do the same thing!

This tutorial will explain how you can teach your dog to “count” by training him to press 1, 2, or 3 based on how many pieces of kibble are in front of him. He must have experience pressing buttons and understand (or appear to understand) that a symbol on a button can represent something.

Supplies needed: recordable buttons or magnetic whiteboard with magnets, kibble or small treats, a surface to place the kibble on

Video of Cooper performing this trick 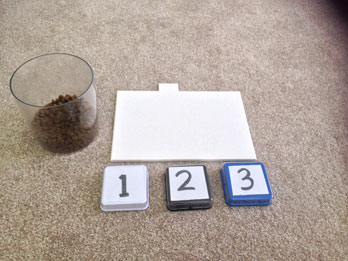 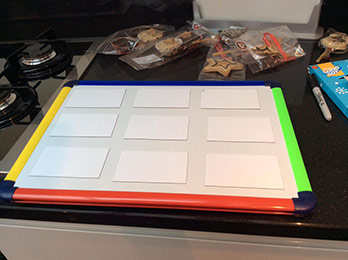 Your dog must know how to wait for a treat because you will be leaving treats in front of him.

Getting Started: Pointing at two buttons

Place one piece of kibble onto the board as you say the word “one.” Point to the number 1 button and get your dog to press it. When he does, say “one” again, praise him, then pick up the kibble and feed it to him.

Place two pieces of kibble onto the board as you say the word “two.” Point to the number 2 button and get your dog to press it. When he does, say “two” again, praise him, then pick up the kibble and feed it to him.

When placing the kibble on the board, always use the same number of hands. If you switch between one and two hands your dog might think that he’s supposed to be watching how many hands you’re using.

Moving On: No more pointing!

Up until now you have been pointing at the button your dog needs to press. The next step is to eliminate the pointing. Keep your buttons as they were in the previous step: with the “1” button on one side and the “2” button on the other.

Place one piece of kibble onto the board as you say the word “one.” Then ask, “How many?” and wait for him to press a button. If your dog is used to the buttons and knows they give him food, he should naturally want to press them. If he doesn’t press them on his own yet you might need to return to the previous step and practice some more.

If he presses the wrong button, ignore him and let him try again. As soon as he presses the right button, say “one,” praise him, and give him the kibble.

Start switching between one and two at random.

Keep practicing until he is reliably pressing the correct button at least 7/10 times. It may take several hours of practice spread over several days or weeks before your dog gets to this point.

Before you can add more numbers, your dog needs to understand that the button means the same thing no matter where it’s placed in relation to the other buttons. Move the number 2 button to the bottom of the board. Switch the 1 & 2 buttons around. Make sure that he still presses the correct button even after you’ve moved them around.

The Next Level: Three Buttons

Don’t move onto this step until your dog has mastered the 1 & 2 buttons – pressing the correct button at least 7 times out of 10. If you move on too soon you will confuse your dog. Unfortunately I made this mistake and had to go back to two buttons!

Create a new button that has the number 3 on it and plays the word “three” when pressed. Arrange your buttons around the board so that they look like the photo above.

Now you need to introduce the number 3 button to your dog. Place three pieces of kibble on the board while saying the word “three,” then ask “How many?” and point at the number 3 button. When your dog hits the button, say “three,” praise him, and give him the kibble. Repeat this 4 – 5 times in a row, then start mixing in 1 and 2 as well. To avoid confusion and to give your dog a hint, you should start saying the words “one” and “two” again as you put the kibble down.

After you’ve been practicing this for a while, stop saying numbers “one” and “two” and only say “three.” Then stop saying “three.”

If your dog stops answering one and two correctly and starts hitting buttons randomly, you might need to go back to two buttons for a while.

As you can see from Cooper’s videos, I have only used three buttons with him so far. He has almost mastered these so I will soon be adding a number four. With each new button you add you should repeat the steps from “The Next Level” described above. Don’t add more buttons until your dog has mastered the existing ones.

Although I didn’t mention it until now, I alternated between cotton reels and kibble when I was training Cooper to “count.” I did this to get him used to counting things besides kibble. However it’s a lot harder to keep him focused on cotton reels. He keeps looking at my hands to see where the next treat is coming from!

You don’t have to use cotton reels, of course. You can use anything that you have multiples of.

If you Google for tutorials on teaching your dog how to count, you’ll find that all of them require you to give a “secret signal” to your dog. That’s okay to do since it’s just a “trick,” but personally I would rather know that my dog is getting the answers by himself! There are a couple of things you can do to try to ensure your dog isn’t “cheating.” You will see me doing these things above: